Bingo is one of the most popular and pervasive gambling games on the planet. The game is similar to traditional lottery, but offers far more immersive and social fun. It is usually played for cash prizes, but you can also find Bingo games that offer prizes such as event tickets, paid vacations, cars, raffle baskets, and much more. The sky truly is the limit when it comes to Bingo!

A Bingo game is won when a lucky player manages to match the numbers on their unique cards with the ones that are randomly selected by the caller. The first person to achieve a set pattern determined before the game on their card needs to yell ‘Bingo!’ in order to reserve their winning spot. A check will be performed, and if everything in order, the winner’s prize will be awarded.

From Italy to International Fame

The history of Bingo can actually be traced back to 16th century Italy. The game stems from an Italian lottery called the Lo Giuoco del Lotto D’Italia, which is still commonly played every week in its country of origin. The game was introduced to France in the 1770s, where it was renamed to ‘Le Lotto’ and became popular among aristocrats and wealthy gamblers. Germany also adopted their own version of the pastime in the 1800s, but they decided to use it as an educational children’s game instead.

Once Bingo had finally made its way to America in 1929, it first became known as Beano. Edwin S. Lowe, a local businessman, introduced Beano at state fairs after hearing a Bingo player mispronounce the winning word. A dealer for the game would choose numbered discs from a box and players would mark off their cards with beans instead of markers. Naturally, if they won they would shout ‘Beano!’ instead of ‘Bingo!’.

Later on, Lowe hired a University of Columbia professor – Carl Leffler – to assist him in boosting the number of combinations that Bingo cards could house. By 1930, Leffler had designed thousands of different cards which were developed to offer fewer non-repeating number groups and conflicts when more than one person won in a round. 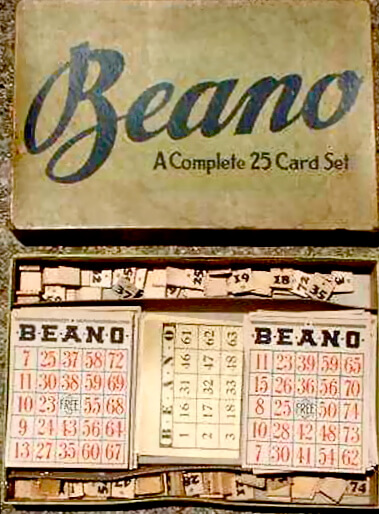 The Spread of a Legend

It wasn’t long until the church spotted a golden opportunity in Bingo as well. A Catholic priest in Pennsylvania obtained permission from Lowe to use the game as a means of raising funds for his church, and it soon boomed in popularity. By 1934, around 10,000 Bingo games were being played each week! Gambling was, and still is, banned in many US states, but Bingo is often still permitted as a way for churches and community organisations to raise funds for good causes.

Bingo also made the jump to land-based casinos around the 1940s. Edwin Lowe eventually built his own casino on the Las Vegas Strip, the Tallyho Inn, where he began to offer Bingo for real money play. Nowadays, players in North America alone spend over $90 million on the game per week, while online Bingo players spend far more!