The casino gaming industry loves its classics and more than this they love to make subtle variations on these games to produce some slightly different but still with the similar factors that made the classic so popular.

Spanish Blackjack is also a variation in this nature and based of the classic card game that is included in its title. The game is essentially Spanish 21 and as such has a good couple of similarities to the original as well as a few unique aspects, like any good variation should. The decision on whether or not this variation is worth a gander rests on the shoulders of the players however.

The fun with making variations of classic games, especially those played with cards, is that the inherent rules associated with the game are fundamentally of the original so essentially players with knowledge of the classic game can quite easily transition across to the variation without losing much time or effort in learning a new game from the ground up.

Additionally, the variations also shine a positive light on the classic, such that players can mix and match between this Spanish Blackjack and the original quite effectively, enjoying the subtle change of experiences between them. All in all, this bodes quite well for the card game in question. 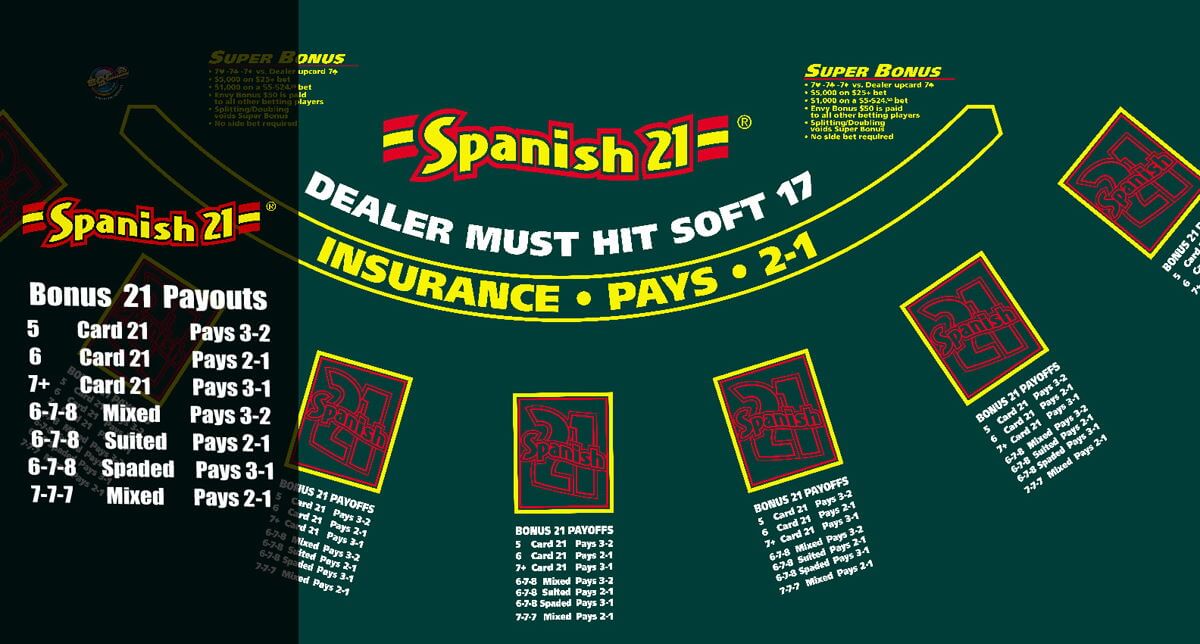 In order to afford this game, the appropriate due diligence as well as give those players unfamiliar with the original game a fighting chance at deducing the rules, it is best to start from the beginning.

Firstly, comes the setup, which in Spanish Blackjack comprises of between 6 and 8 decks of cards, all of which are either Spanish decks composed of 48 cards or their French deck counterparts composed of 52 cards but with the 4 tens each deck removed.

The statisticians amongst us have likely already noticed that this will of course shift up the game odds and even betting style, slightly in the favour of the dealer unfortunately.

To begin with, players place a bet, the cards are then dealt, 2 to both the dealer and player. The dealer of course gets a hole card, which is unknown to the player. Fundamentally the game of Spanish Blackjack follows a fairly direct path from here, with the resultant being that either the player or dealer is closer to 21, or of course there is a push or tie.

The key differences are in the smaller details, the little rules that are changed throughout the game, making the experience rather new and unique for players of traditional online 21 blackjack games. Overall though these rules are best picked up in practice as is the case with Lucky Nugget casino in Canada has to offer, they can be applied practically to actual effect.

All in all, the cards rest with the player on whether or not Spanish Blackjack is the right variation for them. A fact they may have to explore in detail and through comparison with both the traditional game as well as others from the long list of available variations.

It seems that the cards are all dealt then, so to speak, providing the players with an opportunity to hit or hold.